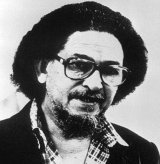 Celebrating a Life of Activism

Tributes from Earthlife Africa, Khanya College, the Anti Privatisation Forum and of course from poets.

All organisations are encouraged to bring banners & materials for display/distribution

Extracts from the obituary by Patrick Bond

World-renowned political organiser and one of Africa’s most celebrated poets, Dennis Brutus, died early on December 26 in Cape Town, in his sleep, aged 85.

Brutus was born in Harare in 1924, but his South African parents soon moved to Port Elizabeth where he attended schools. He entered Fort Hare University on a full scholarship in 1940, graduating with a distinction in English and a second major in Psychology. Further studies in law at the University of the Witwatersrand were cut short by imprisonment for anti-apartheid activism.

Brutus’ political activity initially included extensive journalistic reporting, organising with the Teachers’ League and Congress movement, and leading the new South African Sports Association as an alternative to white sports bodies. After his banning in 1961 under the Suppression of Communism Act, he fled to Mozambique but was captured and deported to Johannesburg. There, in 1963, Brutus was shot in the back while attempting to escape police custody. Memorably, it was in front of Anglo American Corporation headquarters that he nearly died while awaiting ambulance reserved for blacks.

While recovering, he was held in the Johannesburg Fort Prison cell which more than a half-century earlier housed Mahatma Gandhi. Brutus was transferred to Robben Island where he was jailed in the cell next to Nelson Mandela, and in 1964-5 wrote the collections of poems Sirens Knuckles Boots and Letters to Martha, two of the richest poetic expressions of political incarceration.

Subsequently forced into exile, Brutus resumed simultaneous careers as a poet and anti-apartheid campaigner in London, and while working for the International Defense and Aid Fund, was instrumental in achieving the apartheid regime’s expulsion from the 1968 Mexican Olympics and then in 1970 from the Olympic movement. Upon moving to the US in 1977, Brutus served as a professor of Literature and African Studies at Northwestern (Chicago) and Pittsburgh universities. He wrote numerous poems, ninety of which will be published posthumously next year by Worcester State University.

Following the political transition in South Africa, Brutus resumed activities with grassroots social movements in his home country. In the late 1990s he also became a pivotal figure in the global justice movement and a featured speaker each year at the World Social Forum, as well as at protests against the World Trade Organisation, G8, Bretton Woods Institutions and the New Partnership for Africa’s Development.

Brutus continued to serve in the anti-racism, reparations and economic justice movements as a leading strategist until his death.

His final academic appointment was as Honorary Professor at the University of KwaZulu-Natal Centre for Civil Society. While there he published the autobiographical Poetry and Protest in 2006.

Amongst numerous recent accolades were the US War Resisters League peace award in September, two Doctor of Literature degrees conferred at Rhodes and Nelson Mandela Metropolitan University in April, and the Lifetime Achievement Award of the South African government Department of Arts and Culture in 2008.

The memory of Dennis Brutus will remain everywhere there is struggle against injustice. Uniquely courageous, consistent and principled, Brutus bridged the global and local, politics and culture, class and race, the old and the young, the red and green.