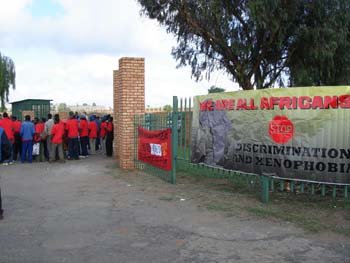 we are all africans

The Anti Privatisation Forum joined with the Coalition Against Xenophobia at the ‘Lindela Repatriation Centre’ in Krugerdorp yesterday/today for a 24 hour picket calling for Lindela to be shut down. Our struggle knows no borders and we extend our solidarity to our African brothers and sisters who are being grabbed on the street, chased out of their homes and abducted to the deportation camp. The existence of the camp is a long-standing shame of democratic South Africa. 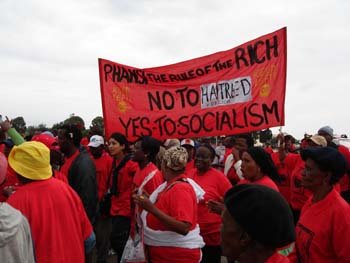 Whether the ’Congress of the People’ rightfully belongs to anyone in South Africa is a question void of any meaning when there is a complete unwillingness to confront the glaring racism, Afrophobia and violence that is Lindela. If South Africa ’belongs to all those who live in it’, the principals on the throne of the Freedom Charter would be joining the Coalition to demand its closure. 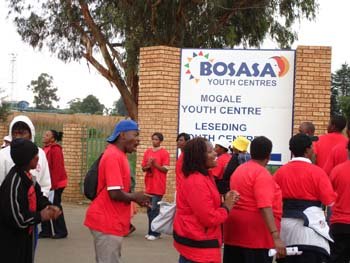 Lindela is a deportation centre (euphemistically renamed a ‘repatriation centre’) at the bottom end of a system primed to filter out poor Zimbabweans and Mozambiquans as well as all other ‘illegal’ immigrants (mostly all from the African continent). The police arrest anyone who they suspect of being an immigrant, using the stereotyped markers of a darker-than-South African complexion, language proficiency or simply self-referential ‘identification’ - Verstaan jy! Many ID-card carrying South African citizens are of course also detained. Like the dompas before it, the ID book must be done away with, or apartheid continues to be real. 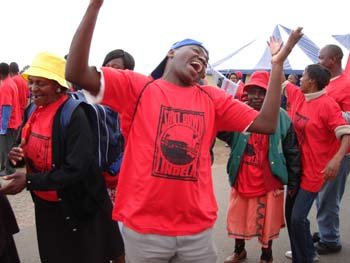 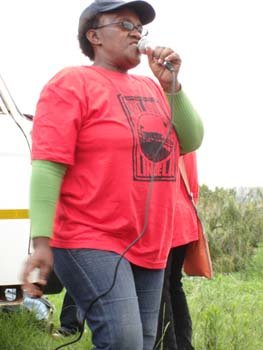 Besides the complete lack of political will to adopt a open and solidaristic immigration policy, another main reason that (immigrant) influx control persists from apartheid to today is that it is profitable for corrupt police, Home Affairs officials and the owners of Lindela. Corruption is so routine amongst the police that they refer to immigrants as ’ATMs’. Gaining access to basic amenities, phones and visitors in Lindela depends on the payment of bribes. The biggest takings go to Dyambu Trust, which owns the private company that runs Lindela - Bosasa. The Home Affairs Minister, Nosiviwe Mapisa-Nqakula, is a founding member of Dyambu together with other senior ANC Women’s League members. Though she called an internal report on conditions in Lindela as "a real indictment on our work as a department," this did not stop her from rehiring Dyambu Trust to run Lindela. She was indeed passing the buck: Dyambu receives over R40-million a year in terms of their contract with the Department of Home Affairs, and R59 per detainee per day (in 2005). 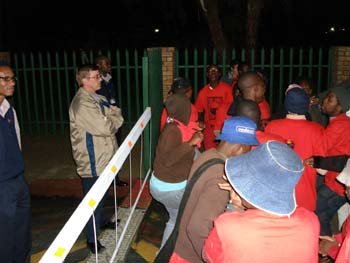 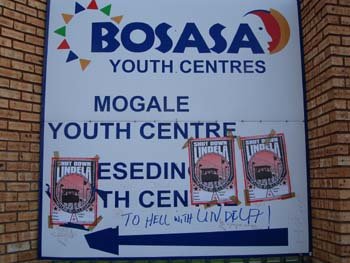 What we have here is a disgusting example of a politically-connected private company earning big profits from the oppression, mistreatment and misery of fellow Africans. It is supremely ironic that this kind of ‘policy’ and behaviour is reminiscent of the privatised ‘nationalism’ of the colonial days. Meanwhile of course, wealthy ‘non-South Africans’ are welcomed and provided with all the services and dignity/respect that can be mustered by our government - simply because they have money. Large scale foreign corporations are given the red carpet treatment but those who flee their own countries precisely because of the inhumane and profit-hungry activities of these same corporations - in conjunction with corrupt and undemocratic governments - are seen as ‘undesirables’ and ‘illegals’ and shown the back door - simply because they are poor. Lindela - hidden away on the edges of Johannesburg behind high walls and guard towers, where no-one can see what is going on, is South Africa’s symbol of shame.

It is not for a more humane deportation of our African brothers and sisters that the Anti Privatisation Forum is demonstrating its support. The extortion, sexual harassment, degrading treatment and sometimes beatings/torture of detainees are the signs of an underlying injustice that stems from a deep-seated xenophobia and sense of national, social and economic superiority amongst many ‘South Africans, not least of which is our own government and the political leadership therein. The continued operation of Lindela is an affront to human dignity, solidarity and equality and to the professed ideals/principles of South Africans own struggle for liberation as well the South African Constitution. As long as it continues to operate, Lindela will stand out as the main symbol of South Africa’s denial of its own struggle heritage and an arrogant and misplaced nationalism that divides African people and feeds an underlying xenophobia amongst ‘superior’ South Africans’.

Lindela must be shut down immediately. The South African government must begin a process of adopting an open immigration policy in which all African peoples are treated with dignity, respect and welcomed as a positive addition to the social, economic and cultural building of our country. South African authorities must stop the business of policing who is, and is not, ‘South African’. At its core, and especially given the divisive and oppressive history of colonialism on our continent, nationalism is a constructed political and social disease that continues to hold back the united development of peoples of our region and continent.

[The 24-hour picket of Lindela started yesterday at 12 noon and ended at 12 noon today. The APF mobilised communities from the East Rand, Soweto, the Vaal, Pretoria and the Free State to support the action and were joined by immigrant communities from Joburg south (Forest Hill, Rosettenville) and the inner city (Hillbrow, Yeoville, the Central Methodist Church)] 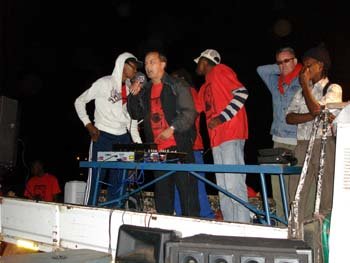 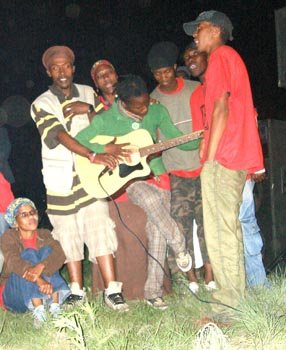 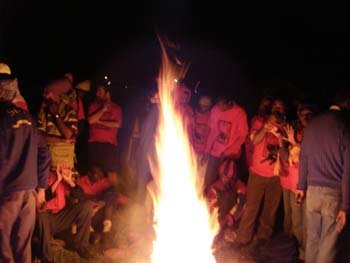 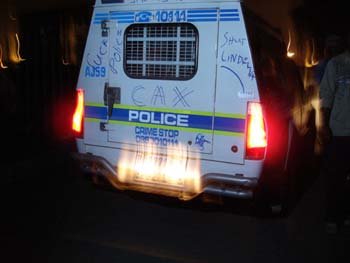 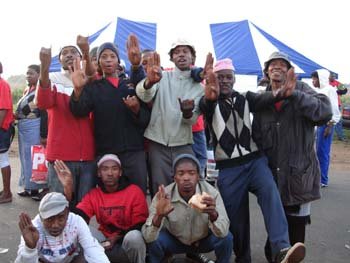 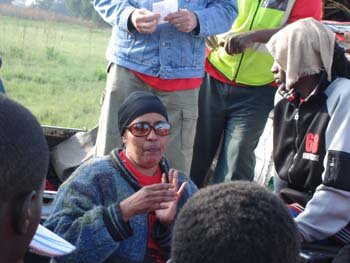 Message of support from a Somali refugee 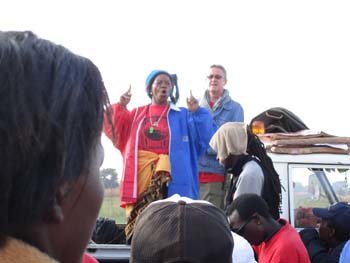 Florence Mankwashu from the Soweto Electricity Crisis Committee on the mic 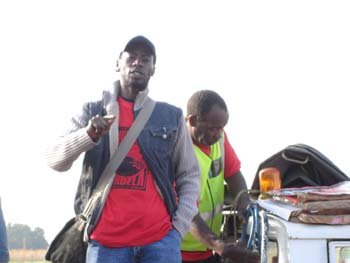 Message of support from a DRC refugee 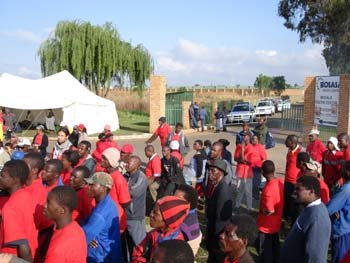 Saturday morning at gates of Lindela 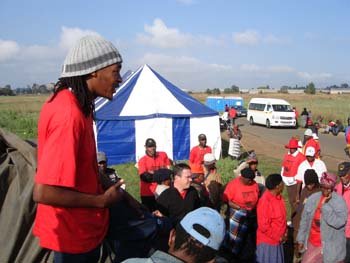 APF organiser, Silumko Radebe, warns against the xenophobia in our communities 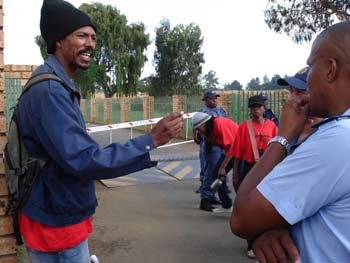 ’A uniformed man is an uninformed man’ 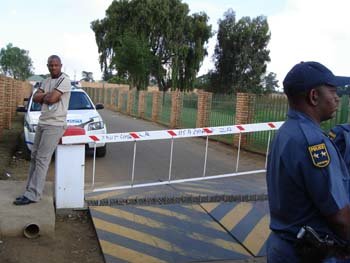 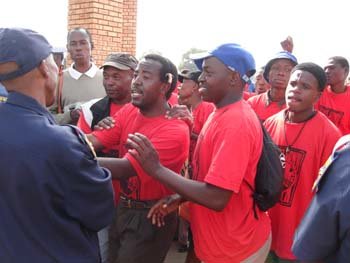 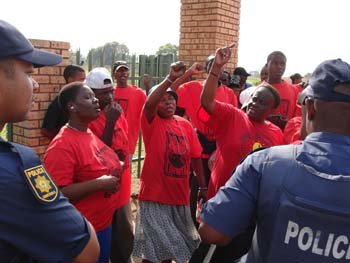 Forward with the struggle against xenohobia!