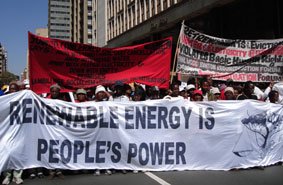 Earthlife Africa and APF banners on march against Eskom, 23 April 2008

On the 23rd of April 2008, the Anti-Privatisation Forum (APF) and Earthlife Africa Jhb (ELA Jhb) will be joining with other organisations to protest in the streets of Johannesburg against Eskom’s proposed and unjust tariff hikes.

The march will begin at Library Gardens at 10am, moving to City Power (Jorissen Street) and then to Eskom (Smit Street). In addition to this protest in Johannesburg, protests will take place in Pretoria (to DME and NERSA), Durban and Cape Town on the same day.

These events will be preceded by pickets on Tuesday (22nd of April) in Pretoria (DME & NERSA), in Johannesburg (Eskom & DME) and the Vaal (Eskom). All of these pickets will commence at 10:00am, please contact APF Organiser, Silumko Radebe (see below) for more information.

The proposed tariff hikes of 60% in real terms will negatively affect the living standards of poor households and will be at odds with efforts to reduce poverty. Eskom will be placing a burden on consumers who already cannot afford electricity. Despite the government and Eskom’s repeated boasts about electrification, 30% of South Africans are still without electricity. Of the 70% who do have electricity, many poor users are frequently disconnected with users of prepaid meters disconnecting themselves (due to lack of funds to feed the meter). The Free Basic Allocation of 50kWh a month per household is widely regarded to be inadequate; 50kWh doesn’t stretch far between six to eight people.

Social ill will only be increased by the proposed tariff structure. In response to rising electricity prices, many poor consumers will turn towards alternative energy sources such as paraffin, coal, and biomass. This will have enormous financial and social consequences: for example, in 2000, there were 46,000 paraffin fires, 50,000 paraffin burns, and at least 4,000 children died from drinking paraffin. The total cost to the economy of paraffin-related incidents is R100-billion a year. Our children are being physically scarred for life or are dying because Eskom refuses to supply adequate electricity to its poorest and most marginalized citizens. [1]

This move of Eskom’s is surprising and foolhardy. There exists a set of reforms, which if implemented, can alleviate the power crisis and the lack of access crisis that besets this country. They are:

1) A step-block tariff with a free basic allocation of 100kWh per person per month. 2) The opening up of Eskom’s secret contracts with large-scale users and tariff increases on the 25 companies that consume 40% of the electricity generated. 3) The scrapping of subsidised electricity for foreign corporations under the Developmental Electricity Pricing Programme, and in particular, the Alcan contract. 4) The abolition of pre-paid metres. 5) The reorganisation of Eskom within the state so that it operates as an agent of social construction and not as a profit-making business. 6) Investment in renewable energy instead of the costly fossil fuels of coal and uranium. 7) No member of Eskom management shall be paid a bonus.

Tristen Taylor, Earthlife Africa Johannesburg’s Energy Policy Officer, states, “As much as electricity tariffs need to increase to address infrastructure maintenance needs, the proposal from Eskom is either vague or at odds with endeavors for poverty eradication. It is of utmost importance that Eskom addresses the issue of access and affordability of electricity supply for indigent users and unless Eskom adequately addresses its electricity-generation strategy that is at the heart of its long-term financial ill health, Eskom’s proposals should be rejected by NERSA.”

APF Organiser, Silumko Radebe, further states that, “The restructuring and preparation for the privatisation of ESKOM has led to the present crisis. Following the dictates of GEAR and ASGISA and the Washington consensus that gave birth to the neoliberal policies, the energy sector was opened to foreign investments through privatisation and deregulation. The motivation for restructuring Eskom was that there is a need to introduce competition into electricity provision. Eskom was, therefore, broken up into its generation, transmission and distribution divisions and corporatised. The current crisis is borne of these efforts to create a power market where scarcity of energy resources ensures a ‘competitive environment’ and profitability for the generators and distributors of electricity. The restructuring of the distribution division set up regional electricity distributors (REDs) that would be financially and organisationally independent of one another and the state. In other words, electricity is treated as a commodity rather than a public service.”