The Anti Privatisation Forum with the Social Movements Indaba and a coalition of organisations marched on Saturday 24 May 2008 against xenophobia through the inner city of Johannesburg to the Gauteng Legislature to submit a memorandum to government. 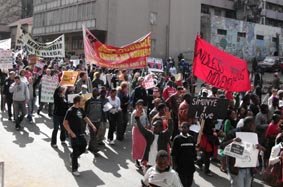 The public responded to the call from the Coalition Against Xenophobia in a colourful demonstration for the inclusion of foreigners in our communities. Over 5000 people marched despite SMS messages circulated in ANC-Cosatu-SACP alliance circles discouraging participation in a march organised by the ‘ultra left’. Well, thanks then to the ultra left for mobilising communities against the insidious hatred bred by poverty, developing links with immigrant communities and being clear about why we are poor.

Fears are patrolling our freedom and already determine with who or what south Africans associate with. It is regrettable that the APF can report that the buses from its affiliates in Attridgeville and Shoshanguve had to be cancelled for threatened reprisals. Buses and taxis from other townships did otherwise arrive for the march unhindered. For APF comrades, this was a march unlike any other - at its start at the Pieter Roos Park below Constitutional Hill, the Minister of Public Service and Administration, assumed the platform to number herself among the ‘we Africans united against the scourge of hatred’. And demonstrator professed ‘FREE MARKETS / FREE IMMIGRATION / FREE SOUTH AFRICA’. He and Geraldine Fraser Moleketi were the minority in a march that attributed xenophobia to the effects of the government’s immigration and business friendly policies. The memorandum addressed to Premier Mbazima Shilowa, the Departments of Housing and Home Affairs calls on the “South African government to acknowledge its role in the crisis, and to assume responsibility for providing solutions to the problems that speak to the root causes of the problem.” This would include, the memorandum stated, the suspension of “the neoliberal macro-economic policy approach.”

While the government will be hardheaded in its insistence on finding a criminal motivation to the xenophobic attacks, the demands submitted to government are unlikely to be met. What the demonstration did achieve was an affirmation of African working class unity and to break the spell of tension that has been stalking Johannesburg streets for the last two weeks. Residents of Hillbrow and the inner city cheered the march from their balconies as is it proceeded down Claim and Pritchard streets. The loudest cheer en route to the Gauteng legislature came from the refugees at the Central Methodist Church. Immigrants taking refuge at the church had prepared to come to the march but their busses to the starting point had been delayed. Banners they had prepared the evening before were as critical of government’s policies as the Coalition’s memorandum: ‘Mr Mbeki: is this what you call quiet diplomacy.’ Incensed by the xenophobic coverage in the South African press, particularly the Daily Sun tabloid, another wit declared, ‘Aliens are what you find on Pluto’.

Amongst the speakers on the march was a representative from the Refugee Fellowship based at the Central Methodist Church. Representatives of the Congolese, Cameroonian, Ethiopian, Somali and Nigerian immigrant communities also had opportunities to speak, all welcoming the solidarity demonstration. As government continues to treat the xenophobia as a criminal phenomenon, they have very little faith that the police will do anything to solve the problem. The South African police violently raided the Central Methodist Church in January this year, brutalising the desperate people sleeping on floors there. How can the police be trusted to find a solution to xenophobia when they are confirmed xenophobes, relating to foreigners as cash machines? When the Remmoho Women’s Group visited Alexandra police station on Tuesday, 20 May, refugees there spoke of harassment by members of the police force.

The solution to xenophobia is for ‘the enemy at home’ to be targeted by our organisation and our action. These enemies are not foreign immigrants but the corporations that commodify our basic resources, retrench workers, casualise employment and fix the prices of basic foods. Treating xenophobic south Africans only as criminals reminds the APF of government’s criminalisation of our members who protest for basic services. Both xenophobia and service delivery protests will not go away unless social development involves people and is not conceived as a benefit trickling down from investments. With the upsurge in violence, the ANC government must with all urgency acknowledge that the time to start back-pedalling on its business-led development is now.