MARCH AGAINST XENOPHOBIA AND HATE
SATURDAY 24TH MAY GATHERING FROM 9am
VENUE: PIETER ROOS (Empire and Hospital Road) 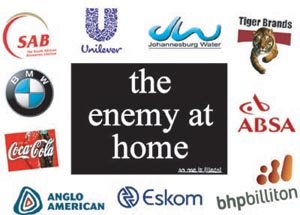 poster for the march

The march will proceed through Hillbrow and stop at the Departments of Home Affairs and Housing before ending at the Library Gardens.

The message marchers will be conveying is that our struggle is common and knows no borders.

AWAY WITH HATRED AND FEAR!
DOWN WITH XENOPHOBIA!
THE ENEMIES OF THE POOR IN SOUTH AFRICA ARE NOT THE POOR FROM OTHER COUNTRIES. LET US FIGHT TOGETHER AGAINST A CAPITALIST SYSTEM THAT KEEPS US ALL IN POVERTY.

CALLED BY THE SOCIAL MOVEMENTS INDABA

It is a sad day for South Africa when we see our brothers and sisters from other countries being attacked, killed and injured in our communities and streets. This is not the kind of South Africa we want. We want a country where everyone can enjoy our hard-won freedoms, where everyone has a job, a decent place to live and where we do not have to struggle for the basic necessities of life. That is the kind of South Africa we fought so hard for and we must continue to fight for. We must not allow ourselves to become full of hatred and anger against those from other countries who live in our communities and who are also poor and fighting for the same things. They are not to blame for our problems.

The poverty that we continue to experience 14 years after our independence is caused by a capitalist system that wants to keep us poor. The reason why so many of us have no jobs is because our government has adopted policies that favour the rich. It is not our brothers and sisters from Zimbabwe, or Mozambique or anywhere else that are responsible for us living in shacks, that are responsible for our lack of adequate water and electricity. It is the policies of GEAR, corrupt councillors, greedy capitalists and an ANC government that has forgotten the poor. The poor from other countries that now live with us here in South Africa are escaping the same kind of oppression, corruption and greed. The poor, wherever they are, are being exploited and oppressed by the same capitalist class.

Blaming and attacking immigrants will not solve anything - it will only create further anger and conflict within poor communities. The only ones who will benefit are those who continue to feed off the desperation and poverty of the poor. It is clear that the recent attacks are the work of a small minority who want to take advantage of the anger and frustration is our communities to help themselves and make enemies out of those who are our fellow brothers and sisters in struggle. We must come together as communities and put a stop to this NOW!

We cannot, and must not, allow ourselves to be manipulated to support actions which make our communities to live in fear. We must organise and defend our communities and everyone who lives in them from those who want to tear us apart through hatred and greed. We cannot rely on the government and police to serve us and protect the poor - whether South African or immigrant - as they should be doing. We must come together as communities - whether we are ANC members, workers, civic activists, church-goers, youth - and show that we have the collective will and power to defeat those who would make us all live in fear and create division and hatred amongst ourselves. Let us all stand up together and fight the real enemies of poverty and desperation.

FORWARD TO THE UNITY OF THE OPPRESSED! RESPECT AND DIGNITY FOR ALL!