Limitation of free basic water allocation of 6kl per household, per month is set aside & City of Johannesburg ordered to provide 50 litres per person, per day. 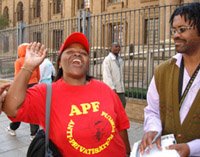 Grace Munyai (applicant#2) speaking to the media outside the court

JOHANNESBURG, 30 April 2008 - In a historic and ground-breaking judgement, the Johannesburg High Court today declared that the City of Johannesburg’s forcible installation of prepaid water meters in Phiri (Soweto) is both unlawful and unconstitutional. Judge Tsoka further ordered that the limitation of free basic water to the present 6 kilolitres per household per month, be set aside and that the City of Johannesburg and Johannesburg Water must supply Phiri residents with 50 litres per person per day. Furthermore, the court declared that the choice given to residents of either a prepaid meter or a standpipe for water provision in Phiri is also unlawful and directed the City to provide residents of Phiri the option of an ordinary credit metered water supply. Judge M.P. Tsoka also determined that the City should bear all the legal costs of the applicants since 2006. 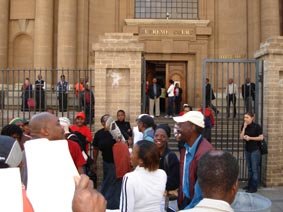 As jubilation at the judgement ripples across Phiri and the rest of Soweto, the City will be sitting shell-shocked. Johannesburg Water’s Operation Gcin’amanzi cannot continue in its present form and an entirely new system for water provision has to now replace it. The pitiless pre-paid meters have finally been consigned to the dustbin they deserve. If the City had followed the writ of the law in implementing their water services, consulting with the community and listening to the voices of protest, they would not be sitting with egg on their faces and a R320-million loan for pre-paid meters they now can’t install. The City chose rather to deploy the Red Ants, private security companies and police in Phiri at the onset of Operation Gcina’manzi in August 2003 to protect their misshapen project. The fact that Phiri residents were gagged in their own homes as work proceeded against their wishes, enduring arrest and detention, has redounded to the City’s loss. What needless waste! This crisis is one of their own making.

The Coalition Against Water Privatisation would like to extend its heartfelt thanks and congratulation to our advocate in the case, Wim Trengove, and to all the attorneys and paralegals at the Centre for Applied Legal Studies (CALS) at Wits University who pulled together the legal arguments that proved so persuasive. When government implements by managerialist command and disregards the interests of the people it is meant to serve, the Bill of Rights can mean little more than the paper it is written on. Thank you to the Coalition’s legal team for helping to make the Constitution real again.

As CALS stated in an earlier press release, this is the first time, ‘in which the constitutional right to water has explicitly been raised’ and the judgement itself provided meaningful and clear reasons for the orders issued. Judge MP Toska ‘criticised the municipality for its discriminatory approach to the provision of water’, finding that: “the underlying basis for the introduction of prepayment meters seems to me to be credit control. If this is true, I am unable to understand why this credit control measure is only suitable in the historically poor black areas and not the historically rich white areas. Bad payers cannot be described in terms of colour or geographical area”. The Judge went on to say that, “25 litres per person day is insufficient for the residents of Phiri ...to expect the applicants to restrict their water usage, to compromise their health, by limiting the number of toilet flushes in order to save water is to deny them the rights to health and to lead a dignified lifestyle.” The Judge further found that the consultation leading up to the adoption of pre-paid meters was inadequate, stating that the process was “more of a publicity stunt than consultation”. He also criticised the City’s “big brother approach” to the residents of Phiri. 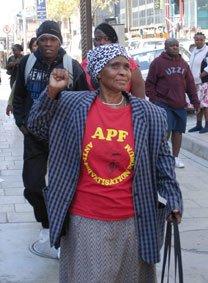 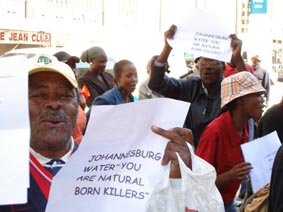 Coalition cadres demonstrate outside the Court

The greatest credit for this extraordinary legal victory must go to the residents of Phiri that resisted the installation of the pre-paid meters, and to all the other residents of poor communities, both in Johannesburg and across the country, who have been fighting for accessible, affordable and sufficient water provision/delivery . The Coalition Against Water Privatisation formed around the water crisis in Phiri and the struggle was given life by Phiri’s strength.

While the Coalition knows that this judgement will most probably be appealed by the City of Johannesburg and Johannesburg Water all the way to the Constitutional Court, this does not detract from the political and social significance of this victory. We are confident that this judgement will be upheld and that water provision will now no longer be delivered in a discriminatory, patronising and inhumane manner. The fact is that water service delivery, not only in Johannesburg but across the entirety of South Africa, can never be the same.